Words have power. The importance of positive adoption language.

Words have power. The importance of positive adoption language.

Words have power to convey messages and evoke feelings.  Language is the vehicle we use daily to communicate our ideas and notions about the world we live in.  Words have a way of shaping our beliefs and thought processes.

Adoption can be an emotion-driven topic, sometimes we fail to realize that word choice in certain contexts may convey unintended negative messages.  For example, it is typical to hear the phrase “giving up for adoption” or to ask about a child’s “real” parents.  Terms like these among others, can have a damaging effect on how others perceive adoption as well as on how adoption triad members view themselves.

For adoptive parents, we affirm their role as their child’s forever family.  Most importantly, for the child, using honest, but positive language, can be the difference between shame and confidence about their story. It’s more than being politically correct. It’s being emotionally correct.

Whether you are an expectant or birth parent, a waiting adoptive family, clinical professional, or even just a friend to an adoptive family, it is crucial that you familiarize yourself with positive adoption language.

Why use positive adoption language? 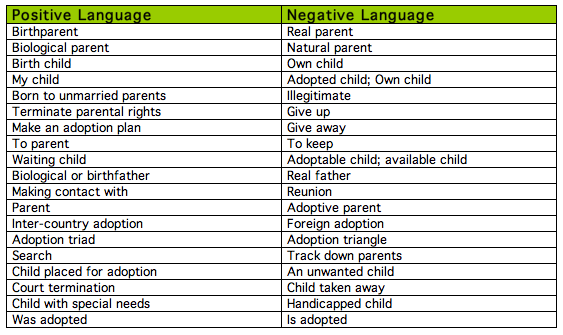 What's wrong with these phrases?

It is very important to consider positive adoption language when talking to adoptive families about their children. There are many well-meaning people who talk about adoption using phrases or asking questions that can be unintentionally hurtful. The phrases mentioned above are problematic because they are based on misguided assumptions about adoption. Phrases like these imply that adoptive parents are more saint-like than the birth parents and are somehow better and more fit to parent. They also imply that adoptees should feel grateful, and even indebted, to their adoptive parents for adopting them, which completely ignores all the losses associated with adoption. These kinds of phrases are damaging and need to be erased from the adoption dialogue. They only serve to further the misconceptions about adoption.

Transforming perceptions, one word at a time.

We can’t expect society to change its perception of adoption overnight, but changing the way it speaks of adoption is one step towards meaningful heart change. It isn’t easy to change the way a culture speaks; it’s even hard changing our own language. You may find yourself correcting your wording mid-sentence; that’s okay.  It’s an opportunity to share your perception of adoption to help influence how others begin to think and talk about adoption. Be attentive to how your family and friends are speaking about adoption. You can be an adoption advocate, educating others on how to reference it in a more positive, considerate manner. Be kind, but don’t be afraid to respectfully correct people who use negative adoption language.